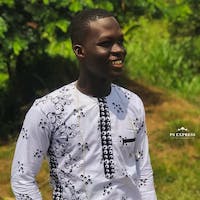 The async keyword is written before the keyword function when declaring a function. It turns the function into an async function.

An async function is simpy a function that knows to expect the await keyword somewhere in its definition block. The very basic meaning is that, the async keyword makes a function asynchronous, and allows it to be able to use its associative keyword await.

Here's how you define an async function

The async keyword written in front of the function keyword simply means:

Earlier on, I mentioned that async/await makes using Promises easier and simpler. But in my last article on Promises, I did mention that the Promises feature was introduced as the best way to write asynchronous code - better than using Callback Functions. So, you'd probably be wondering: how better could async/await be than Promises?

Let's use an example to demonstrate.

The function below checks if a number is a perfect square and returns its root. The result (square root) is resolved by a Promise after 3 seconds ~ the global setTimeout() is used.

I'll be using the log() function which prints stuff on the DOM of the Codepen iFrame. If you've read my previous articles you'd already be familiar with this function. But feel free to use any method of your choice.

Now, this is because at the time we log the sumOfRoots to the console, the three Promises had not settled yet. So, JavaScript goes ahead and performs the subsequent codes. We'd have to wait for all the Promises to settle before logging the value to the console.

What does the nesting remind you of? Callback hell? Yeah, scary right? 😅

Our code works fine. The only problem is it becomes hard to quickly understand, plus we had to write so many lines just to achieve this. I even drank 2 bottles of water after writing this function. 😅

Let's run from Promises, shall we?

JavaScript async/await makes using Promises a cup of milk! We'll only need four lines in the getSumOfRoots() function block to achieve the same result. Also, the code becomes more readable and easily understandable. That brings us to the second keyword in the topic: await.

Let's take a look at the following sentences:

In JavaScript, which type of objects have a status of pending? Promises! Right.

The await keyword is used to wait for a Promise to settle.

Usually, when we try to perform a task in a Promise, JavaScript goes ahead and executes the following codes while it runs the pending code in the background, and when this background process completes, JavaScript deals with it the way it is programmed to.

The await keyword kind of alters that default behaviour in the async function in which it was used. It makes JavaScript "wait" for the Promise, before which it was written, to settle before continuing to run other codes.

Let's explain the above syntax:

Let's go for a test run!

Remember the over-nested getSumOfRoots() function which looked like callback hell? Good! Let's re-write it with async/await.

Done! Yes, done - just like that! Notice that syntactic sugar taste in your mouth? 😁

Now, since async functions return Promises, let's use the .then() method to grab our sum of square roots, which resolves because of the last return statement.

Cool. But... Let's use an alternative method. We can use the array .reduce() method and the static Promise.all() method to rewrite the above async function.

The static Promise.all() method has been covered in my article on Promises. Basically, it accepts an iterable object of Promises (preferrably an array of Promises) as a parameter, waits for all of the Promises to settle, and then, it settles with an array of the results from the settled Promises in its paramater.

But, what if there are errors?

There are three ways you can handle errors in async functions. You can do so by using:

Before we proceed to handling errors we need to alter our rootOf() function so it can be able to make a rejection (error). At the moment it only resolves with the root of the perfect square. Let's change that.

I assume you already have knowledge of the try..catch structure as it's a basic method of debugging code in JavaScript.

Error-handling with the Second Callback of .then() Method

The .then() method takes two callback functions: the first is executed when the Promise settles with success; the second catches errors - which we'll be making use of. In the example below we won't log the error directly.

Error-handling with the .catch() Method

We can chain the usual .catch() method to the returned async-function Promise.

This brings us to the end of our discussion.

Asynchronous JavaScript is a very interesting topic in the language, and sometimes for beginners it could be a lot of fun.

Perhaps, later in the future I might publish new articles in asynchronous JavaScript.

But until then, please keep your eyes on this blog. We've got a lot to learn together.

I can say this is the best article I've read on this topic 😁.

You explained so well. Thanks for sharing 👍 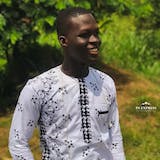 Glad you found it helpful, Jome.